New electronic predator calls from FOXPRO are coming out soon, and they’re ready for the next hunting season to start soon, too! People who work for them have made a new high-range programmable call that is called the XWave.

Although it was formally launched in September 2019, FOXPRO did not begin distributing the XWave to clients until November.

They have changed their speaker design dramatically because of the XWave, and it has made them better than ever.

The XWave has two speakers that are called Xtreme High Definition (XHD). Both of the XHD speakers are horn speakers that have a tweeter added for a better frequency range.

Even more extreme volume can still be achieved with the new and improved XHD speaker system, which still has a very realistic sound.

The following is a quick snapshot.

With its new and unique design, some have compared the XWave to a cross between the Shockwave body and the CS24C speakers, but much enhanced! 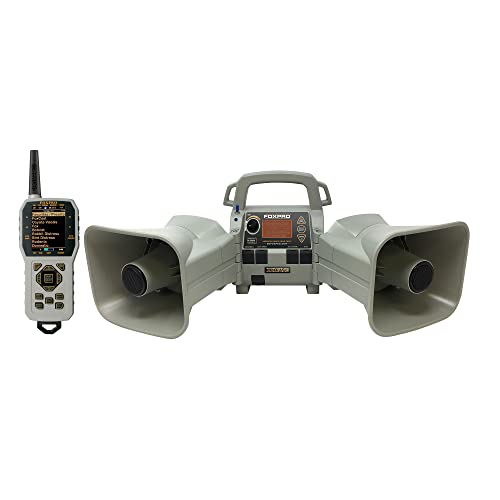 The design and features.

XWave is bigger because it has two speakers. It weighs 4.75 lbs. Because this might not fit in the top of your backpack, you might not be able to just throw it in there. But it’s still pretty easy to move.

Programmable: The XWave has 4GB of internal memory and can store up to 1000 sounds, so you will always have the calls that you need.

A digital game call made by FOXPRO is called the XWave.

For starters, it comes with 100 high-quality FOXPRO sounds, as well as 111 other sounds that are free. To get the free sounds if your XWave doesn’t already have them, go to the FOXPRO website.

If you want to make your own calls and sounds, you can easily upload them to your computer through the mini USB port. As long as the files are in MP3, WAV, 24B, and FXP format, they should work.

A speaker for the FOXPRO XWave Digital Game Call.

What’s interesting is that for the first time, FOXPRO has added Bluetooth support to the XWAVE. There are many ways to use this simple feature.

At the end of a long day of hunting, you could play music to relax. You could use your own iPhone to connect to the XWave and play any animal sound from your own library.

If you want even more volume and need to connect more speakers, there are two 3.5mm external speaker jacks on the back of the phone.

A digital game call made by FOXPRO is called the XWave.

This means that even though the XWave doesn’t come with a decoy already, if this is something you’d like to add to your hunting gear, there’s also a 3.5mm aux jack that you can use to connect an approved device like the Jack Predator.

If you want to run the main caller unit, you’ll need 10x AA batteries to power it. FoxPro thought of everything, so they included a lithium battery and charger in the box. The caller also has a charger port for the whole thing.

Depending on how many of the XWave’s features you use, it can run for between 3 and 7 hours on a full charge.

TX1000 Transmitter remote has a full colour graphic LCD screen that is big and clear for easy use, so it is very easy to use.

As a new electronic game caller, it comes with all the FOXPRO technology that you would expect from one. The XWave comes with:

The remote has been proven to work for more than 100 yards. In the same way as most digital calls, make sure you have a clear line of sight between your game call and the transmitter. If you can, raise the XWave about 3 feet off the ground to get even better results.

As for how it works, it has all the things you would expect from a normal remote. Another thing: It also has 50 presets, and you can look at all of the sounds in a single list or in groups.

Play modes are Single, Jukebox and Repeat. There are three ways to play it: For when you need to use the buttons at night, the buttons light up. This makes it easier for you to see what you’re doing at night.

Barometer and moon phase indicators are also shown on the remote display. There is also a timer or clock, FOXBANG technology, and many other things.

XWave usually works with the TX-1000 remote control, but if you ever need to manually control the XWave, you can do that, too.

With the remote, you can keep it close to your body while you work with it. It’s 3.18 inches long, 1.17 inches wide, and 8.78 inches long. The USB port is a mini-USB, and the cable you need is already there. Need three AA batteries to run the transmitter? This is what you need.

In this case, FOXPRO is the name of the company that makes good Technology

The technology that FOXPRO is known for and what makes their callers the best is not something that you may have heard of if you have never used them before.

Even if you’ve heard of it, you may not know what each function does or how it works. Before we get into the details, here is a quick one.

After you fire your weapon, the app automatically sends your caller to a certain place. FOXBANG options can be found in the instruction manual

FOXMotion lets you fade the sound from the left speaker to the right speaker to make it sound like the animal is moving (and back). This change in sounds makes it seem like an animal is moving, which helps people believe that your call sounds are real.

FOXFusion lets you mix and match any two sounds of your choice at the same time when you call. This will help you come up with more complex and unique call sequences that will make your prey more curious and make the situation more like the real thing.

FOXPitch lets you change the “pitch” of the sound in an effort to get someone to do something. As your prey gets closer, you can change the pitch of your voice to make a different sound. This change will make your prey stop and pay attention, allowing you to get the perfect shot and get the best picture.

In order to use FOXDATA, you first need to turn it on. It will then record real-time information about each and every stand (temperature, barometer, moon phase, stand duration, shot time, etc.) After that, you can use the data for future reference and look at the information that was taken. Over time, you will be able to predict animal activity and how well you hunt based on real data.

FoxCast lets you make a set of sounds, volume levels, and even pauses that you can play at the same time. Gets you close to almost hand-free calling, so you can focus on taking the best picture.

In cars, the volume is called the auto volume.

You don’t have to do anything to your volume.

New XWave comes with a limited warranty of five years. This is what you’d expect from a company like FOXPRO, which is very good.

FoxPro is an all-American company, and its products are all made in the United States, so you’re not likely to have any problems with them or their products.

However, if you have a problem with your XWave, know that FOXPRO has the best customer service in the business.

FOXPRO XWave: What do people think?

When it comes to technology, the FOXPRO XWave is going to give the Shockwave a run for its money. The XHD speakers have even more volume and sound quality.

Even though the XWave is new to the market, you can be sure that FOXPRO products will be high-quality because they are made by them.

Even though the price is higher than we thought, we know that FOXPRO fans will love this new and better programable game call.

There is no doubt that the XWave predator caller will last for a long time. It will be a great addition to any hunter’s arsenal of tools.