So, I was fortunate to have a hands-on on the Primos Boss Dogg this month. Today, in this article I’ll share my experience with Primos Boss Dogg call device on my hunting. I’ll try to explain How good it is at the field, What I liked about this call, and Should you buy Primos Boss Dogg for your hunting? 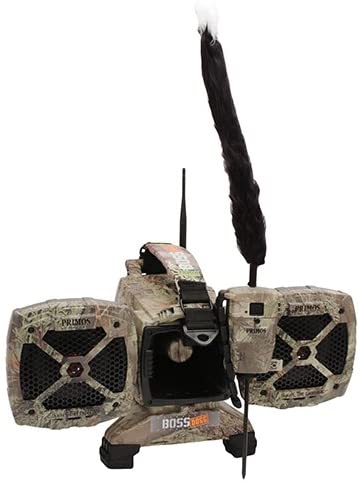 My Experience With Primos Boss Dogg

First of all, Primos Boss Dogg call is extremely handy to use, its camouflage design is so helpful in the field, it gets involved in the environment very easily. There is a nice handle on the top that is really sturdy. I use a lanyard to pick it up if you wish you can do that too.

There are two speakers that can be pointed in any direction that you want it to go. It has the main horn speaker which was really helpful for me because I have had a situation where I’m out crow hunting sometimes and with the help of these 3 speakers, I just direct a speaker toward that side and it really brings the birds in and cover more areas at the same time.

Now, let talk about the connectivity feature, Primos Boss Dogg has overall 3 ports, one port is an AUX port that helps in connecting an external speaker, the second port is a decoy port that helps you to connect a decoy to it for better hunting and the last port is a USB port which is helpful for programming different sound. Overall, I got all the necessary connectivity features.

Primos Boss Dogg electronic call comes with 75 individual sounds of different animals which is very real to listen to. There are also 6 expert hunts installed in it for a better hunting experience. Randy Anderson has programmed most of the calls that make the hunting even more fun.

Let me tell you about the audio port, with the help of IN and OUT audio port, if you have got your own mp3 player you want to run through it and an out audio if you are trying to run it to an external speaker.

Primos Boss Dogg runs over 8 AA batteries which run the main machine for a quite sufficient amount of time.

The feature which amazes me most after Expert Hunt is the long-range of calls. Usually, we hunt inside an area of 50 to 100 yards but the Primos Boss Dogg’s calls are too loud, it is easily hearable from a distance of 200 yards.

Sounds in the Primos Boss Dogg are very well organized like there are few categories, Crow hunting, Deer hunting, Elk hunting, and others.

The remote controller of the Primos Boss Dogg is very handy to use and it fits perfectly in the hands of the user. The calls button are placed at the right place that makes them easy to find in hunting.

With the help of the two hot buttons on the remote controller, I set my favorite sounds on these two buttons which comes very handy on my hunting period.

In the Primos Boss Dogg device, you will get 75 prebuild high-quality calls of the different animal, you can increase the number to 2000 with the help of 4GB storage. Along with 75 animal sounds, you will get 6 expert hunts calls too which is really really helpful in hunting. These calls are specially programmed by one and only Randy Anderson.

The Primos Boss Dogg comes with three 50-watt speakers that produce 150 watts of power. With the help of 3 speakers, this beast can produce sound over 200 yards which is very impressive.

Primos Boss Dogg comes with a 1 year of warranty.

So, Should You Buy Primos Boss Dogg?

My fellow Hunters, Primos Boss Dogg is a beast. The amazing features make it one of the game call in the market. It is a little bit expensive but if we see the overall picture, it is one of the best in the market. If you can afford it, I’ll highly recommend you to go with it. I’ll stick with Primos Boss Dogg for a while because of the rich features.

I really enjoyed the company of the Primos Boss Dogg throughout my hunting journey. It is one of the best game calls for hunting. I’ll definitely recommend you to go with it if you are looking for a good game call device.

I really liked the Primos Boss Dogg device. Features like Expert Hunt and up to 200 yards call range impressed me a lot. I’ll give it a 4.3-star rating out of 5 stars.
3.8
Buy At Amazon